Day one of the Delhi Photo festival saw a packed auditorium, full of anticipation for the talks and exhibitions opening through the day. The festival was inaugurated with a symbolic group photo taken by Aditya Arya on one of his large format vintage cameras- instead of the traditional lighting of the lamp. 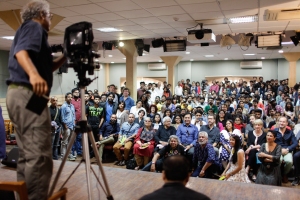 The Festival officially took off with a key note address by David Campany, titled Affection & Suspicion. 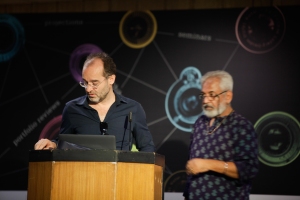 David Campany gets ready to start his address

Quoting Pliny the Elder, he explained that as a modern form of expression, photography has often been looked at suspiciously by the fine arts, however, the inherent beauty of a good photograph is undeniable, and evokes affection.

Questioning weather photography belongs to the arts or to the sciences, Campany spoke about the multi-functionality of art as a medium that serves an important tool providing visual information in a variety of fields like fashion, journalism, forensics and research among many others. In its early stages, photography was a mere method that assisted in reportage but with time it progressed from a tool to an art. It was a time when the norms were subverted. Fixity gave way to experimentation.

Campany suggests that photography can coexsit as both art and document in a culture that understands that art is not very different from reality.

Raghu Rai reminiscing about his early days of his photojournalism

Following the keynote address, Raghu Rai launched the new photo magazine, Creative Image, in the presence of the very first and last magazine editors he has worked with over his long career. Raghu Rai spoke of his long journey with the photographic image, and how far from over it is. Raghu Rai spoke of his experiences of working with Kuldeep Nayyar and Aroon Purie ( at the Statesman and India Today) and credited them for having taught him the business of making magazines. Creative Image will focus on not only the established masters of photography, but also seeks to show works by emerging photographers, and especially focus on images being created in India by Indians.
In addition to emerging and established photographers, the magazine will also show bodies of archival and historical works, bringing together perspectives from different times, people and places. The magazine will also show contemporary imagery that shows us important events from around the world.
The cover of the first edition has a photograph by William Dalrymple, taken on his smart phone. Rai spoke of the ubiquity of the photographic image and of this being an era of “anyone can do it”, and that the magazine will reflect this ethos and print any work that the editors think deserve to be shown.

The Aarohan exhibition is launched 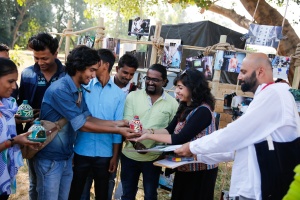 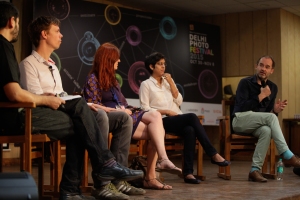 The panel discussion, moderated by Rahaab Allana, touched on a number of issues that are on the minds of contemporary photographers, editors and gallerists across the world. In times when there is a proliferation of still images and everyone can call themselves a photographer, the role of the gallery as the primary disseminator of photography and the still image is fast changing, if not diminishing entirely. Rahaab asked some pointed questions on the current and future relevance of the gallery space, the commercial aspects of photography, and where the medium was headed to given constantly changing technology and new possibilities in ways of seeing and showing work.

David Campany opined that the gallery could not become redundant, that there will always be works that are best suited to being shown in a gallery. He did however agree that there are some works that are best not shown in gallery spaces, that some are better off as photo books or online slide shows. David insisted on looking at, and exhibiting a photograph for the sake of the image, and not to value it based purely on its ‘$’ value.

Rob Hornstra insisted on the importance of independence for a photographer, to not be beholden to the whims of editors, or gallerists, or writers. Instead of being dependent on institutions, he insisted that photographers should look for collaborations and most importantly have a ‘do it yourself’ attitude. He spoke of the necessity for photographers to become more like film directors, where the photographer executes the idea with the collaboration of a group of talented people together.

Devika Daulat Singh spoke of the recent emergence of photography as an art form in India, and the need for there to more infrastructure in place for the medium to gain traction in the country. She was of the opinion that the gallery is on its way to a slow death as even curators, editors and gallerists were now looking online to find new work to show and sell online.

Regina Anzenberger spoke of her own gallery space in Vienna and how she has had to adapt to the changing business of running a gallery. In an effort to keep running, she has added additional programing including a Photo Book Festival, Education programs for the community, an expanded book shop that sells self published, and limited edition books, and also hosts guest lectures- all of which keep the gallery busy and in business. She insisted on the need for the traditional gallery to reinvent itself to reflect the times.