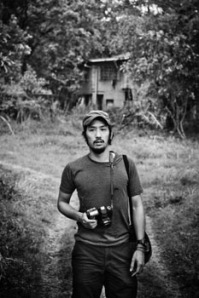 We spoke with Geric Cruz, a photographer from the Philippines, on his upcoming exhibition at the Delhi Photo Festival…

DPF : How does it feel to be selected to the second edition to the Delhi Photo Festival – what was your first reaction?

GC : Of course, I was happy and humbled to be selected.  I can’t express how thankful I am to the DPF team for giving me this opportunity. I’m excited to be able to show images of our culture in a different venue.  Though the place may be different, I am hoping the idea is universal to everyone.

DPF : Tell us a bit about your work at the festival this year and where the inspiration came from…

GC : My work “Second Star to the Right” began during my 10 month artist-in-residency in Zambales. My initial concept for the project was very general. About relationships – the bond of a person with another person, thing or place. Denver and Karlo, the two boys you see in my photos, were one of my subjects for that initial concept. I remember taking my first photo of them – two small figures standing in a vast field- and feeling a rush of emotions flooding through me. I looked at the two small figures and saw myself and my brother. The purity of their friendship and their love for one another brought me back to a time of innocence – A relationship before the complications that come with growing up.

A few years ago my brother and I fought and we hadn’t been as close since. It had always been an issue I knew I had to deal with but wasn’t sure how to fix. That’s when the concept changed. The series became an apology letter to my brother. Witnessing each moment between Denver and Karlo was sort of stepping back in time. It allowed me to miss and appreciate those moments. At the same time they were a step forward in healing that issue. In the end my work became not only about revisiting memories but it showed me that all is not lost. You can return to that state of mind.

While I wanted to document the peak of closeness between Denver and Karlo, to give them a tangible memory, it also became a reflection of my own story. It became sort of collaboration with them giving their input to which photos felt most true to them – It became our story.

DPF : What are you currently working on?

GC : Right now I am conceptualizing a way to turn my photo series into a book. I thought that my involvement with the boys would end with the residency but I still feel like things are unfinished. I’m seeing it as a more long term project, following the boys as the years go by. When you do a project that meaningful to you, you feel like you must maximize it because it is hard to stumble upon that same feeling twice.

I also really want to curate and publish a local ‘zine for young filipino photographers so that there is a platform for new works to be seen and to encourage discussion and excitement towards photography.

DPF : What is the photography scene like in your country? Do you think there is room for more? What would you like to see…

GC : I don’t want to generalize because I feel I’m not really qualified to judge the photography scene. But from what I see it is becoming more diverse and I am happy about that. I feel like people are becoming more open to different ways of telling stories.

Personally, I love seeing honesty in a persons work. Everybody starts out trying to follow a certain standard or aesthetic, myself included, but as their process evolves they start being more concerned with the story being told in their own voice. That always resounds with me.

Images from the series Forgiveness is Wonderful